Footballers are not renowned for their great intellects, but West Ham's 21 year old captain Nigel Reo Coker (pic left) is different. Read THIS interview in The Independent and make up your own mind. He's probably been the Hammers' best player this season, certainly the most consistent. It wouldn't at all surprise me if he made Sven's World Cup Squad. Along with Anton Ferdinand (pic below) and Paul Konchesky. So with West Ham Academy graduates Joe Cole, Michael Carrick, Glen Johnson, Rio Ferdinand, Jermain Defoe and Frank Lampard also likely to make the trip it could be another proud World Cup for West Ham. Let's hope there are three West Ham players in the team if they make the final! remember Hurst, Peters & Moore? West Ham 4 Germany 2. And if the article in 4-4-2 magazine is anything to go by, history might repeat itself. We can but hope. You could actually construct an entire England team from current and former West Ham players. No really! Have a look at this... 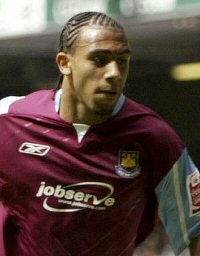