Reflections on the 2009 Conservative Conference

First of all, a heartfelt apology. I know I have been a useless blogger this week. I always find it difficult to do good blogging at conferences. This year, for some reason, I just couldn't motivate myself to blog much. It was partly that I didn't go into the conference hall much, partly that my schedule didn't allow much free time, and partly that I was completely dog tired, having got between three and four hours sleep a night. Anyway, I realise it's not good enough and I have let down my readers. Normal service will now resume.

I've been going to party conferences for 25 years. This one has been by far the most enjoyable. It was great to meet so many of my blogreaders, and I was delighted that more than 250 of you came to my blogreaders party last night at the City Inn. A good time seemed to be had by all, and I think everyone agreed that Steve Nallon (pic) was brilliantly funny. I certainly don't regret that I got a comedian to do a turn rather than a politician! Thanks again to Chartwood and City Inn Hotels for their kind sponsorship.

Manchester was a great venue for the conference. A high standard of hotels (I can highly recommend the Manchester City Inn), and a superb conference centre contributed to a really enjoyable week. The exhibition felt like a real exhibition and I suspect the stands got a much higher level of traffic than normal. The avenue of shops was a great innovation.

Politically, it was a good week to be a Tory. The media tried their best to whip up a split over Europe, but no one bit. The usual suspects managed to keep their gobs shut, thereby proving that a degree of internal discipline is sometimes no bad thing. Chris Grayling's 'gaffe' over General Dannatt never caught fire and apart from that there didn't seem to be any queasy moments.

The Pride event was attended by more than 650 people and was a triumph for all those involved in its organisation. Scott Seaman-Digby, CCHQ's commercial director, and his colleague Eugene Keane deserve massive credit for having the idea, driving it forward and making it such a success. Even Ben Summerskill couldn't spoil it by his ridiculous decision to boycott it. He proved beyond all reasonable doubt that he and Stonewall are leftist puppets. He first of all said he wouldn't go because of Michal Kaminski - the same Michal Kaminski who held exactly the same post as leader of the European Reform Group when he accepted the invitation. What changed in between? Nothing. It's very sad that he and the other small band of protesters couldb't see beyond their party political blinkers and bring themselves to acknowledge that the Conservatives have made huge strides in this area. I have to say that hosting this event was a little outside my comfort zone. I'm not used to speaking in nightclubs but a couple or three WKD blue vodkas did the trick! Not bad for a teetotaller... Pity I hadn't done the same on Monday night when I made my first attempt at stand up comedy. 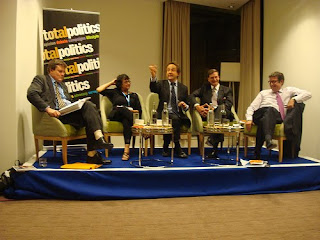 Another highlight of the week was the Total Politics fringe meeting on Trust with Dominic Grieve, Peter Oborne, Yasmin Alibhai-Brown, Anthony Seldon and Chris Bones. I doubt if there was a fringe meeting in the whole conference which had speeches better than those at this event.

Politically the two highlights of the conference were George Osborne's speech on Tuesday and David Cameron's speech today. George's speech was described the most risky speech I have heard in 30 years by John Pienaar. Some said it marked his coming of age. No one can now say the Conservatives are policy-lite in this field any longer. His speech really seems to have made people think and that's no bad thing. I don't really like the mantra of "We're All in This Together" because it sounds a little trite, but I've heard worse (remember Sharing the Proceeds of Growth?).

David Cameron's speech this afternoon was in stark contrast to Osborne's. There was some tough talk but he shared a vision of the kind of Britain he wanted to see and used some very optimistic language. His attacks on Gordon Brown worked well and he showed a real passion. It was a speech seeking to seal a deal with the concerns of those who are not yet convinced by Cameron as a person or his own brand of politics. It was light on policy details, but so it should have been. Other members of his team provided enough meaty proposals during the course of the week. What I wanted from Cameron was what I got - a total contrast to Gordon Brown's machine gun speech last week.

Most Embarrassing Moment of the Week: Almost falling asleep in a fringe meeting I was chairing ... while I was actually talking

Idiot of the Week: Ben Summerskill

Speech of the Week: George Osborne

A Candidate No Longer

In Praise of Party Agents

The Tory Leadership Runners & Riders: My Take for The Telegraph