An Email to Damian McBride

This is a copy of an email I have just sent to Damian McBride, the Prime Minister's Head of Strategy. 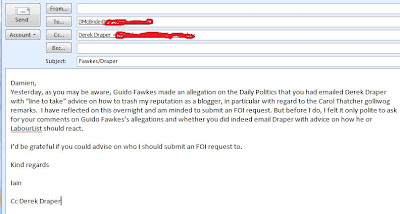 On the Daily Politics yesterday, Guido Fawkes made an allegation that McBride had given Derek Draper his marching orders on how to trash my reputation as a blogger, and in particular how he should smear me over the Carol Thatcher golliwog remarks. This wasn't the first time I had heard the allegation made. Indeed, the last time, I was told that Tom Watson was in on it too. This would not be a surprise as they both sit in the same office, and they act as the PM's political hit squad.

I intend now to submit an FOI on this subject as I regard it as a hugely serious breach of McBride's role as a civil servant - paid for by the taxpayer, if indeed it is true. Several people have warned me off doing this. "Let it lie," they say. One lobby correspondent advised me: "Don't get on the wrong side of McBride".

I'm afraid they 'misunderestimate' me.

But I will say this. I hope Guido's allegations are wrong and that Damian McBride can truthfully tell me that he gave no such advice to Draper either by email or verbally. But if these emails do exist, they will come to light through an FOI request. Someone else said to me that they will just delete the emails, if they exist. I reminded that person that to do so would constitute a criminal offence. It's the kind of thing a certain Richard Nixon got into rather a lot of trouble for.

UPDATE: Guido has submitted an FOI request. In the absence of a reply from DM, I have followed suit...

Dear Damian,
This is a Subject Access Request made under the provisions of the Data Protection Act (1998).
Please provide me with copies of all emails, letters or other documents referring to either myself or my publication, “Iain Dale’s Diary”. In particular, but not exclusively, the analysis provided by you to Derek Draper and LabourList.org on the afternoon of Friday 13, February 2009.
I have copied this to the Cabinet Office Freedom of Information Unit. If you require payment of a fee please advise by return.
I should remind you that it would be a criminal offence to destroy the information requested. Please confirm receipt of this email.
Kind regards

McBride & Draper: A Match Made in Hell

Guido Fawkes, Me & the Number Ten Smears Against Top Tories